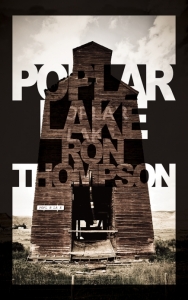 Poplar Lake is a prequel to my 2015 novel, A Person of Letters, with which it shares two characters – the narrator Jake, and his girlfriend Genny.  Here’s a synopsis of the book:

Jake’s fallen hard for Genny, and now he’s brought her home to meet the family. As he introduces her to Poplar Lake, he amuses her with innocent anecdotes about his childhood, and regales her with the story of the town’s founding and the scoundrels, bootleggers, progressives and visionaries who shaped it—all the while dodging and deflecting her questions about his own past. Genny knows he’s hiding something. Does it involve his first love Tammy, his enigmatic friend Clinton Sturgis, or his brother Victor, whom he hero-worships to this day? Whatever it is, it clearly haunts him and could destroy their future together. Genny sets out to uncover Jake’s (and his hometown’s) many secrets.

Poplar Lake is a darkly subversive novel about families and relationships and the day-to-day lies that sustain them, a tragicomedy rich with yearning, heartbreak, and love.

Terry Fallis, two-time winner of Canada’s Stephen Leacock Medal for Humour, has said of the book, “In Poplar Lake, Ron Thompson has written a captivating story, rich with humour and heart. I didn’t want it to end.” “Thompson’s got everything here to make a great Canadian novel,” said Star-Phoenix reviewer Bill Robertson, “and he goes a long way to writing just that.”

Check the “News” tab on this page for updates about Poplar Lake.